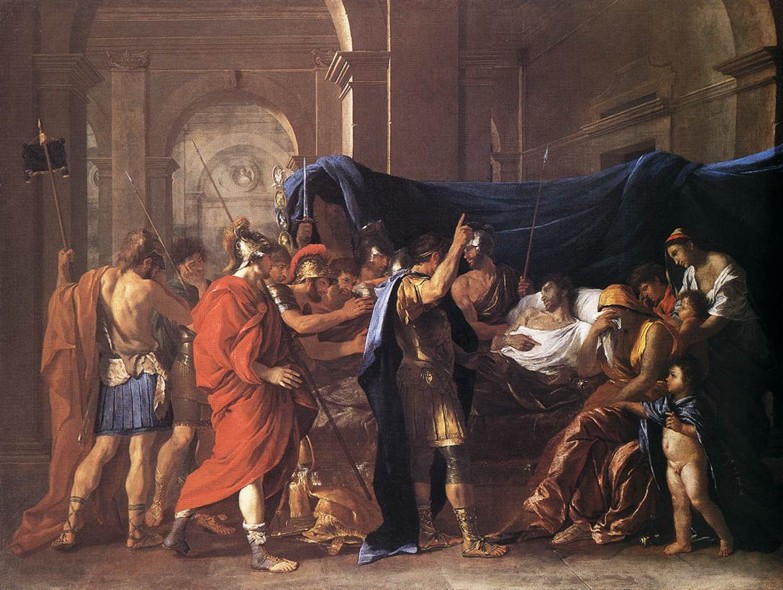 This year marks the 2000th anniversary of one of the great political scandals in ancient Rome.  Germanicus Julius Caesar, commander of the armies in the East and heir-apparent to Emperor Tiberius, fell ill and died at Antioch in Roman Syria.  Blame for his death fell at once upon his estranged friend and colleague, the official governor of the province Gnaeus Calpurnius Piso, who was accused by Germanicus on his deathbed of poisoning the 33-year old general of the legions.  Piso protested bitterly that he had been far away from Germanicus at the time of his alleged murder, but this fact did not prevent him from being put on trial for treason and murder.

The political forces in this triangle of power were turbulent, unpredictable and dangerous.  Germanicus was the public’s darling, the perfect Roman: handsome, virile, victorious and strong.  His succession of brilliant military conquests, mainly in Germania, made him a household name.  He had been adopted by his paternal uncle Tiberius in AD 4, aged 19; and when Tiberius became emperor in AD 14 on the death of Augustus, the first emperor of Rome, the young pretender swiftly became ‘the people’s choice’, the perfect antidote to the jealous, surly, cruel, infamously debauched emperor whom Pliny the Elder called ‘the gloomiest of men’.  The army called for Germanicus to succeed Augustus, and for a while he entertained the idea before professing his loyalty to Tiberius.  It was long believed that Tiberius instructed Piso to keep a watchful eye on the younger man, though this has been disputed by Fred Drogula who insists that the ‘watching’ was the other way around.  As for Piso, he came from a very long line of distinguished but also notorious public servants.  His father and grandfather had both held elite ranks and he himself had been a consul with Tiberius in 7 BC.  A former supervisor of the Imperial Mint, he was appointed Governor of Syria in AD 17.  But Piso had fallen out with Tiberius a few years before over the question of who should govern when the emperor was not in Rome, an argument which he lost but Tiberius did not forget.  In fact, it would appear that his clashes with the new emperor were frequent and public, and to cross a man so easily angered as Tiberius was neither prudent or career-enhancing.

Essentially, the feud between Piso and Germanicus was a squabble over authority.

Though both of equal rank, Germanicus had the edge with imperium maius (‘greater power’) which gave him control of the military forces in the East.  After a visit to Egypt in the summer of AD 19, he returned to Syria to discover that Piso had been running things his own way and ignoring instructions laid down by Germanicus.  Furious with Piso, Germanicus ordered his recall to Rome, but before that could happen, Piso removed himself to the port of Seleucia to brood.  It was at this moment that Germanicus fell ill, dying on 10 October AD 19.  Piso did not help himself by returning to Antioch to re-assume command by force and loudly rejoicing the death of the heir before Germanicus’ body was barely cold.  The charge that he had needlessly started a civil war in Syria, using his own troops against those of Germanicus, was probably the allegation that most infuriated Tiberius.

In the subsequent trial of AD 20, Piso was vigorously prosecuted for murder and treason (and many other charges), and he would certainly have faced the death penalty had he not imposed it upon himself before the trial was over, committing suicide in his home by cutting his throat with a sword.  Perhaps he acted too soon because the eventual judgement found him guilty of little more than insubordination to Germanicus, still a serious crime, but he would not have been convicted of murder.  Furthermore, the Senate flip-flopped in regard to their punishments, almost certainly at the insistence of Tiberius.  At first, Piso’s very substantial property was to be confiscated, then it was ordered to be returned and divided between his three children.  The elders had also ordered Piso’s name to be erased from all public monuments, but this too was countermanded by the emperor.

That the prosecution had nothing but a threadbare case was indicated by how they so thoroughly trashed Piso’s reputation based on his previous service.  Described by Robert Rogers as “a travesty of a trial”, even the charge of witchcraft was invoked with Piso’s wife Plancina shouldering most of the blame for that and for “exulting in the fall of the heir.”  Piso appealed directly to Tiberius for his protection, but his petition was rejected.  This left him no choice but to end his own life in the hope that his children would not be tarnished for his crimes.  Tiberius’ mother and widow of the deified Augustus, Livia Augusta, extended a protective arm towards Plancina and kept her safe – for the meantime.  The whole sorry affair was  given the five-star treatment in a remarkable document unearthed in Andalusia by a metal detectorist in the late 1980s which took the form of a bronze tablet inscribed with the Senate’s ‘judicial review’ of the Piso case.  The Senatus Consultum de Cn. Pisone Patre  heaped nauseating praise upon Tiberius whilst damning Piso’s soul for all eternity.

For Tiberius, this was a cunning plan gone badly wrong. There are strong arguments suggesting that he gave Piso the Syria job because it was a prestigious posting, and being so new to the role of Caesar he wanted to get the Calpurnii Pisones clan onside, rather as Lyndon Baines Johnson observed in regard to his relationship with J. Edgar Hoover: “It’s better to have him inside the tent pissing out, than outside the tent pissing in.”  The Pisones (no pun intended) had a long history of dissent, obstruction, even rebellion, and were proud Republicans who had somewhat grudgingly come around to supporting the imperial system.

Nevertheless, Tiberius remained suspicious.  Piso’s father had fought against Julius Caesar, and he had publicly disapproved of the succession of Augustus in 27 BC; and Piso Junior’s own behaviour was a long way short of the obedience that Tiberius demanded.  Where the emperor miscalculated was that he did not expect Piso to so thoroughly reject the imperium maius of Germanicus, and though in all probability the young heir died of malaria contracted in Egypt during the summer, or possibly even rabies given the long incubation time, Piso had seriously overstepped the mark and enraged the populace when he battered his way back into Syria and then threw a party to celebrate the death of the golden prince.  That is why Tiberius withdrew his support, and also why he insisted that Piso’s children should not suffer the punishments of the father: he wanted to have a foot in both camps.

Germanicus left a powerful legacy to Rome.  He was the father of Caligula, who was adopted by Tiberius as his legal heir, and of Agrippina the Younger, future wife of the Emperor Claudius.  As for the Pisones, they continued their topsy-turvy careers producing consuls, heroes and villains for another 200 years, but the same cannot be said of poor Plancina.  She had shared the various accusations levied at her husband Piso, but because she had the protection of the mighty Livia Augusta, she distanced herself from him and lived on quietly for a few more years.  However, when Livia died in AD 29, there was nothing to stop her vengeful son from renewing the charges in AD 33.  When news of her inevitable fate reached Plancina, in the words of Tacitus “she paid by her own hand a penalty more overdue than undeserved.”

Header image:  The Death of Germanicus by Nicolas Poussin

A dramatic interpretation of the Piso Affair from the 1968 BBC production The Caesars.

An excellent film dealing with another famous legal case in the Republic:  Murder in Rome 81BC

The Works of Tacitus:  http://penelope.uchicago.edu/Thayer/E/Roman/Texts/Tacitus/home.html

Suetonius:  The Lives of the Caesars (Oxford World’s Classics, 2000)

Fred K. Drogula:  Who was Watching Whom? A Reassessment of the Conflict between Germanicus and Piso (Providence College, spring 2015)

Robert Samuel Rogers: Ignorance of the Law in Tacitus and Dio: Two Instances from the History of Tiberius (Transactions and Proceedings of the American Philological Association, Vol. 64, 1933)