Contributed by the Haslam family. 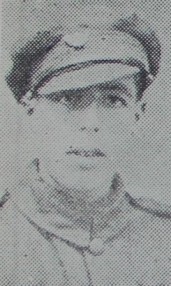 Signaller George David Lane (1898-1918) was killed in action on 28 January 1918 while serving with the King’s Own Yorkshire Light Infantry in the Ypres Salient.  On the morning he was killed, George was with the 1/5th Battalion at the eastern edge of the Salient having moved up to the line from Brandhoek two days before.

George Lane volunteered for service in August 1915 when he was 17 years old.  This was below the legal age for enlistment (18), but 1915 was a notable year for underage recruits.  The numbers of adult volunteers had declined dramatically since the heady days of autumn 1914, and so long as a man could match the required physical minimums of five feet three inches tall (160 cm) and a 34-inch chest (86 cm), few – if any – questions would be asked.  By August 1915 the British government was already considering conscription as a necessity to replace the colossal losses on the Western Front, and many young men simply deducted a couple of digits from their birth year to earn for themselves the King’s Shilling.

George was born in 1898 in Grimsby, Lincolnshire, the first of six children.  In peacetime, he was a ‘carter’, driving a horse-drawn transport wagon for a local company in his home town of Goole in the East Riding of Yorkshire.  The work was heavy, tiring and monotonous, and hundreds of thousands of young men in similar occupations saw the Army as a way out of the humdrum lives they led.  George was wounded by a shell splinter in September 1916, but he returned to frontline service after treatment at No.44 Casualty Clearing Station. 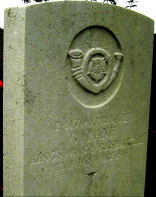 On 28 January 1918, he lost his life in a bombardment.  He was buried in a temporary grave before his remains were permanently interred in the Hooge Crater Cemetery at location XIII. G. 13.  He received the 1914-15 Star, the British War Medal and the Victory Medal.  His family also received a Memorial Plaque.  Five days after he died, his commanding officer, Lieutenant Reginald Embrey, wrote the following letter to his mother: (click for original image)

It is with deep regret that I write to inform you of the death of your son, Signaller Lane 1/5 KOYLI.

Your son was with a working party in the line on January 28th, when a shell burst close to him, killing him instantly.

It may be some little consolation to you in your sorrow, to know that he received a proper burial, and that a cross has been erected at the head of the grave.

Although a stranger to you personally, may I assure you of my deep [and] heartfelt sympathy at your great loss.

As the signals officer of this battalion, I knew the value of your son to my signal section, both as a soldier and a signaller.  He was far ]and] away my best linesman [and] he was the man to whom I entrusted the most difficult line work.  Further, his work never failed to justify my faith in his abilities.

His death leaves an open space in my signal section which I shall find extremely difficult to fill [and] a gap in his circle of fellow-signallers which can never be filled.

The NCOs [and] men of the signals wish me to assure you of their sympathy.  Signaller Lane has left behind him a splendid memory of a fearless young soldier, a capable signaller, [and] an ideal chum to his companions.

Again assuring you of my sympathy,

I am yours faithfully

[Left Inset]  P.S. If there is any point which you would like to ask questions upon, please do not hesitate to write me.  1/2/18

Reginald Embrey survived the War.  He born on New Year’s Day 1892 in Wales and grew up in Wrexham.  The family moved to Salford, Lancashire, where in 1911 he was training for the Civil Service.  He joined the Army on 1 December 1915 as a Second Lieutenant with the Prince of Wales’s Volunteers (South Lancashire Regiment).  On 7 October 1919, he was awarded the Croix de Guerre for his services during the War.  He worked in the public transport industry for the next 30 years, and he was awarded the OBE in 1951.  He died in his native Wales in April 1952, aged 60.