The Black Death was a global pandemic that struck in the middle of the 14th-century and killed maybe a third of the world’s population.  Today we are in the midst of another contagion which, like the Plague, may well bring about a new social revolution, another ‘Peasants’ Revolt’.

The Black Death probably originated in central Asia and spread west along trading routes until it reached Europe.  Initially spread by fleas living on rats, the bacterium Yersinia pestis caused human illness in the lungs, blood and skin that often proved fatal in less than a week.  There have since been many recurrences of the disease across the world, and yet it is a common misconception that the Plague motivated the lower social classes to rise up in what has been termed the Peasants’ Revolt of 1381.  In fact the two events are quite distinct, yet linked, as this article will show.

The total impact of the Plague can only be guessed at.  A general consensus is that it wiped out a third of the global population, possibly as many as 125 million people, and it took nearly 200 years in most places for the numbers to recover.  England was one of the hardest hit of the European nations, and as the graph below shows, the population size did not bounce back for centuries. 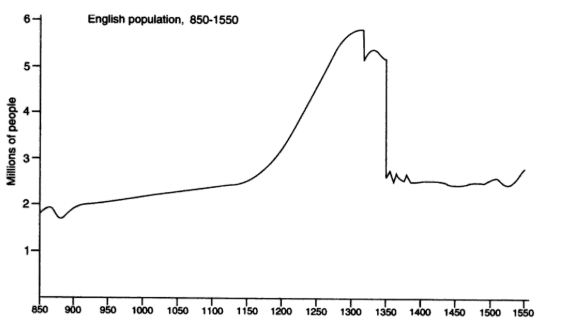 Few would doubt that the extremely high death rate, around 50 percent in some countries, caused such a drop in the peasant and urban labour force that the demand for higher wages rocketed, and in many cases these demands were met by employers and landlords who risked ruin if they did not pay up.  Faced with a sudden and potentially dangerous shift in economic power towards the lower classes, the English Parliament moved quickly to slap down the uppity workforce with the Ordnance of Labourers (1349), a restrictive law passed at the height of the pandemic.  This was followed swiftly by the Statute of Labourers (1351) which attempted to enforce the Ordnance, but in practice it had little effect.  The Ordnance had five main provisions: everyone under 60 must work if able-bodied; beggars must not be indulged; employers must not hire too many workers; wages may not exceed pre-Plague levels; and food prices should be “reasonable” with no profiteering.

David Gillespie argued that there is no direct connection between the Plague and the Peasants’ Revolt of 1381 which, after all, was a good thirty years after the initial pandemic had subsided.  He points out that there were many localised uprisings of the have-nots against what he calls ‘established authority’, and the key motivators were the economic and legal pressures brought by landlords upon their tenants with a view to maximising profits. Gillespie’s conclusion is that the 1381 uprising had little or no connection to the Plague; in fact he draws attention to the remarkable calm in labour relations between 1340 and 1370, a period interrupted by the Plague but not defined by it.

There can be little doubt that work was easier to come by following the devastation wrought by the pandemic, and many labourers could expect more pay for their time and effort.  But any short-term gains were offset by higher prices: less production meant shortages, and anything in scarce supply is expensive.  Nevertheless, there were some significant changes in working conditions.  Whereas before the Plague many workers were tied to the land or had to sign one-year labour contracts, after 1348 the rise of short-term agreements, even day labour, became more common – the 14th century equivalent of a zero-hours contract.  Wage earners could pocket considerably more for their work, especially during the harvest season when unskilled rates went up to 4 old pennies a day, roughly what a skilled craftsman might earn.  Workers and servants became more choosy, too.  It was no longer enough to throw the milkmaid a few scraps from the table; now she demanded – and got – more bread, meat and ale.

This could not last, of course, and the labour laws were swiftly enacted but remained difficult to enforce.  Making a law is one thing; filling an empty table is another, and the realpolitik of the time dictated that the humble worker was coming into his own, at least for a while.  The labour laws were supposedly fair because they applied to both employer and the employee, though of course the pendulum swung the advantage sharply towards the former group, while the latter was expected to conform and even inform on his fellow workers.

The Peasants’ Revolt of 1381 had little to do with the Plague and a great deal to do with tax rises.  Economic opportunities had certainly increased for the urban and rural working classes in the thirty years between the two events.  Despite the Crown’s attempts to shore up the weaknesses of the landowning class, the balance of economic power remained with the labourer.  Many people got used to more money, better food, and a few more luxuries in life, especially clothes.  In 1363 the government attempted to curb lavish spending on luxuries with sumptuary laws, specifically the Statute Concerning Diet and Apparel.  Sumptuary laws have been used across the centuries to control (usually limit) access to certain goods – Prohibition in the USA would be an example – and the 1363 law was focused on clothing, fabrics and food.  As Sarah Silverman stated in her Master’s thesis: “While today it is possible to make assumptions about someone’s wealth by looking at their car or house, in the Middle Ages people could determine the wealth of another by looking at their clothing.”  The more voluminous the garment, the greater the statement of wealth, and thus consumption of fabric increased.  As well as prescribing how much meat and dairy each class of society could lawfully consume each day, the 1363 Act attempted to re-clothe the working class in drab blankets and rough garments.  It was a hopeless attempt at social engineering, and it was repealed the following year, but it demonstrates how governments react if they feel the shifting of the hierarchical sands beneath them.

The backdrop to all of this was the Hundred Years’ War between England and France.  All wars are expensive, and after the accession to the English throne of the boy king Richard II in 1377, the war took a turn for the worst from the English perspective.  Taxes were raised and new ones imposed in an attempt to keep the army maintained, though it seemed to many that great sums were ‘lost’ in the transition from taxpayer to Treasury, most likely disappearing into the deep pockets of corrupt ministers.  The voracious army expenditure drove taxes higher and higher, tax evasion became more widespread, and eventually the pot boiled over into open revolt which broke out in Essex in May 1381.  What began as a local protest escalated rapidly into a national class and religious war which claimed the lives of thousands.  The insurrection lasted five months and was eventually suppressed with extreme brutality after its leader, Wat Tyler, was publicly beheaded in June.

The Peasants’ Revolt is a treasured moment in the history of the political Left.  It is often evoked at times of class conflict between the Establishment and the governed classes, especially when that struggle is rooted in uneven distribution of wealth or social privilege.  So where are the connections to today?  Well, we cannot dispute that the world is in the grip of another pandemic, Covid-19.  Of course, it is by no means as lethal as bubonic plague (though new outbreaks have recently been discovered in China), but its economic shock is far-reaching and potentially very long-lasting.  Both the Black Death and Covid-19 have a strong common element in that ordinary members of society are thrust into the foreground.  In both 1348 and 2020, the ‘peasants’ are visible and much more important.  Supermarket staff, transport drivers, healthcare professionals, care home workers, mail carriers and many more professions have worked steadily through lockdowns and kept national infrastructures from total collapse while the Establishment has often appeared clueless and out of touch.  There have even been sumptuary laws introduced such as reductions in purchase taxes designed to stimulate economic recovery.  More to the point, the taxes of these ‘low-skilled’ workers have financed a long, comfortable furlough for millions of public sector workers, with many of them showing a distinct reluctance to go back to work.  Tension is building, and the many popular protests seemingly unconnected with the pandemic are perhaps symptoms of a social contract that is breaking down.

So what will the Peasants’ Revolt 2.0 look like?  In 1908, Francis Gasquet said of the Plague:  “The most striking and immediate effect of the mortality was to bring about nothing less than a complete social revolution.”  In the short-term, once the approach to Covid-19 moves from reaction to management, the ordinary workers of today will expect compensation, and lots of it.  Nurses and care workers will want higher pay, and may well be militant in their demands, while the ‘low-skilled’ workers in the private industries will insist that their unstinting and often dangerous commitment to their labour be similarly rewarded.  Bus and taxi drivers and other front-line workers have been particularly hard hit by the virus.  As with the aftermath of the Black Death, the ordinary worker is going to insist that his or her labour be recognised for its essential contribution to the economy.

In the long-term, taxes are going to rise steeply.  All those billions – no, trillions – of dollars, pounds, euros and yen which have been ploughed into job retention schemes, tax breaks, health care and so on, will have to be repaid or global economies will sink into a depression so deep that the 1930s will look like a mild fiscal correction by comparison.  That will cause mass unemployment amongst the very people who feel that they have done the most to keep their countries afloat in their darkest hours.  Furthermore, if those tax rises fall upon their shoulders as well, then civil unrest across a much wider spectrum than identity politics could well become a common occurrence.  The great challenge facing national governments in the coming months is to prevent 2021 becoming a re-run of 1381.

Bridbury A R: The Black Death (The Economic History Review, 1973)

Cornelius N: Gower and the Peasants’ Revolt (published in Representations, University of California, 2015)

Gasquet F A: The Great Pestilence (George Bell and Sons, 1908)